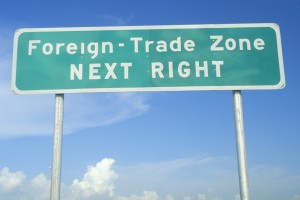 Initially established by the federal government to mitigate the additional costs associated with foreign trade, Foreign Trade Zones (FTZ) are designed to stimulate and encourage US activity and competitiveness in international trade.

In a Foreign Trade Zone, duties and tariffs on imported and exported SKUs, products, and other materials are deferred until the items leave the facility. While stored in an FTZ facility, goods may be held as they are, or sorted, consolidated, de-consolidated, assembled, kitted, or otherwise modified before shipment to the final destination. Duties are not charged until the items leave the foreign trade zone.

How Can TVI’s Foreign Trade Zone Help Your Business?

As Macomb County’s only “public” Foreign Trade Zone, TVI Logistics is ready to assist you with all of your importing and exporting needs to help your company gain a competitive advantage.

Our commitment to logistics excellence and our classification as a certified Veteran/Woman/Minority-Owned business allows us to offer our customers diversified spending while reducing stock ownership costs related to international trade.

Our dedicated staff of inventory management and logistics experts can help you manage:

Our goal is to provide superior and timely service to government and industry in the comprehensive list of tasks and functions shown. Our primary goal is to assist our clients in achieving success, and have been since 1992.
Send Us A Message